The Great Depression was one of the worst periods in American history that pushed people to adapt to tough times. 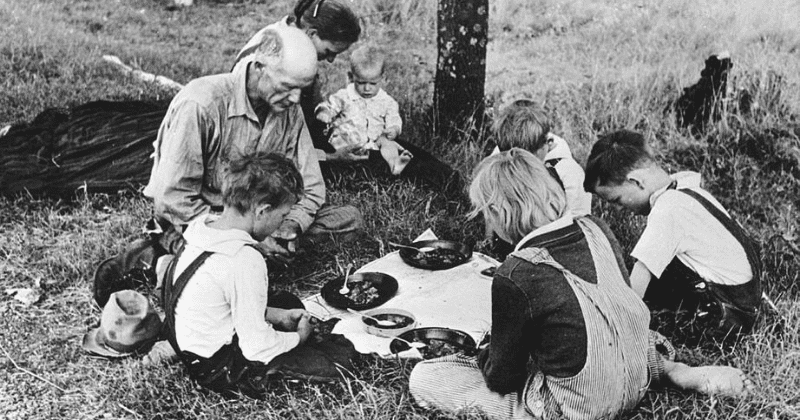 When the stock market crashed in 1929, America went into one of the worst economic downturns in history. Unemployment was at an all-time high, and most families were barely surviving. It was during this period that very basic recipes were created. These meals (which we wouldn't consider eating now) is what kept families going. Ranker reports that people were neither on relief nor malnourished but the pattern of food consumption changed dramatically during this period and the key reason behind this was the advent of the refrigerator and the preference to be thrifty. The Bureau of Home Economics encouraged a lot of substitution, which lead to some rather unappetizing concoctions. Bland foods were heavily promoted as "they wanted to force people to get jobs and to earn enough money to buy spices and seasonings." Food was meant to last like loaves and casseroles. The Great Depression not only changed people's attitudes to food but also their behavior. Some of these meals have been handed down through generations from parents and grandparents who survived this period. Here are 10 strangest meals that people ate in the Great Depression era.

According to Homestead Survival, peanut butter stuffed baked onions were an item that was recommended by home economics teachers. The recipe was published in newspapers urging housewives to become "budgeteers." This ungodly combination involved baking an onion, then removing the inner parts of it, and replacing it with a dollop of peanut butter. While the meal was well-intentioned, it's safe to say that it was not the tastiest dish to be served at the dinner table.

It wasn't easy being the first lady during the Depression. First Lady Eleanor Roosevelt promoted this unappetizing "casserole" that involved spaghetti, boiled carrots, and a simple white sauce of milk, flour, salt, and butter/margarine. To make the spaghetti and carrots mushy, it was cooked for 25 minutes! The sauce was then poured over it. In fact, white sauce was a popular item for most budget meals. The dish was dubbed a "vehicle for nutrition and nutrients." Be that as it may, it certainly lacked flavor as it was bland.

Mulligan Stew is reportedly a name for stews that were originally created by the homeless people. Whatever they had on them at the time, they would contribute it to the stew that was made over a campfire.  According to Ranker, Errol Lincoln Uys, author of Riding the Rails: Teenagers on the Move During the Great Depression, the Mulligan stew was typically a recipe which included onions, corn, potatoes, mixed foraged greens, tiny pieces of meat, and a handful of navy beans. So Yummy reports that to make the stew more filling, sawdust and lint would also be included in it. Nowadays, the traditional stew is made with potatoes, tomatoes, beef, and carrots.

Historians note that the government failed to look at immigrants for food-inspiration during the Great Depression, and instead focused on pedaling out tasteless food like spaghetti and peanut butter-stuffed onions. Yet, there was one surprisingly tasty and vitamin-packed ingredient that came from Italian immigrant women in NYC and across America. That was the dandelion greens that could be "harvested" during spring from parks, vacant lots, and yards. These leaves were then sauteed in olive oil and added to cooked white beans, or used in salads for a delicious, nutritious, and most of all a free meal.

Nicknamed "Sh*t On A Shingle" by U.S. soldiers, this dish included canned corned beef, canned peas, plain gelatin, vinegar, and lemon juice, and was served on bread or crackers. This rather hearty meal was popular even with soldiers during WWII. It also reportedly became a running joke of sorts on M*A*S*H, the hit sitcom show from the 1970s, The dish was also called Save Our Stomachs (SOS) in certain parts of the country. It is reportedly still being served at breakfast places in the mid-Atlantic even today.

Scientists at Cornell University reportedly came up with this weird combination called Milkorno in 1933. This was a gruel-like oatmeal was made from a mix of powdered skim milk, cornmeal, and salt. It was inexpensive and was easily available to the masses. Milkwheato (using wheat instead of corn) and Milkoato, were also used, with the former doing well in those times.

While mock apple pies were available, resourceful housewives attempted to get a fruiter version of pies by simply substituting the tartness of fruit with vinegar. The vinegar pie used apple cider vinegar as the filling, and the pie crust was made with butter, flour, sugar according to So Yummy. Martha Stewart's website states that "this pioneer pie harkens back to a time when produce was scarce but ingenuity was in full supply."

As the name suggests, the dish is a mashup of a variety of leftovers that would typically find its way into the garbage, states So Yummy. The dish is still found in diners across New York and includes a mix of baked beans/fries, macaroni salad, cheeseburger or sausage, and topped with mustard, ketchup, hot sauce, and beef chili. Youtuber Emmy from emmymadeinjapan even tried out her very own version of this dish and declared that it was "not too bad" in spite of all the variety of flavors that typically don't belong together.

Prune pudding or whip was a sought after go-to treat, so much so that even the First Lady Eleanor Roosevelt served this dish to White House guests as an act of solidarity during the Great Depression. As compared to other fruits, prunes were inexpensive and had a longer shelf life. It was a common substitute for fresh and expensive fruits at the time.

Traditional loaves typically involve meat. However, when families couldn't afford them, they would use just about anything in its place. These included leftovers, bread, raisins and niuts which were then packed into loaves, and served for dinner.